In the past, “natural” gas was widely viewed as a “bridge fuel”, less polluting when burned than oil and coal, a bridge until renewable energy sources were more affordable and available.  But solid research over the last 6 years shows that hydraulically fractured (fracked) gas (1) has a larger greenhouse gas footprint than oil and coal due to methane leaks, thus contributing more to climate change than other fuels and (2) results in serious health and water quality impacts in the communities where it is extracted.  Also, prices are projected to increase as supplies decline and exports increase.

Thanks to all who have worked to stop the fracked gas pipeline that was to run from West Lebanon through Lebanon and into Hanover. Liberty Utilities failed to meet the minimal requirement to start construction on the project within two years of final approval of their franchise by the New Hampshire Public Utilities Commission.

Sustained opposition helped lead the Public Utilities Commission to impose a stiffer than usual requirement that Liberty Utilities register customers before beginning construction, a requirement they could not meet. Thanks to all who worked to stop the pipeline!

After Deadly Gas Explosions, The Effort To Fight Pipelines Continues

Posted on February 5, 2019 by uvlocalvores

In Lebanon, New Hampshire, a group of concerned neighbors is determined to show that building new fossil fuel infrastructure is the wrong direction for our climate, community health, and the well-being of neighboring towns. Fracked gas is also a threat to public health and safety, as seen as recently as last fall with gas explosions in three Massachusetts towns. Activists in Lebanon are concerned about the threat that the proposed fracked gas pipeline and storage depot could bring to their community, and the threat that polluting energy brings to our climate. Kathy Beckett, Stuart Blood, Phil Bush and other local residents are joining together to say, “No pipeline here!”

With your support, we’ve helped these neighbors organize over the past year. Together they pushed Lebanon to remove fracked gas from its master plan, putting the city’s renewable energy goals in direct opposition to investment in more fossil fuel infrastructure. They formed the group Sustainable Lebanon, recruited new climate and energy activists in town, and joined the Upper Valley Pipeline Coalition to stop the proposed pipeline system. In October, Sustainable Lebanon delivered a petition with more than 1,100 signatures from local residents and Lebanon High School students, calling for the city council to take every legal and regulatory action at its disposal to halt the plan from moving forward. Jon Chaffee, of Lebanon’s Energy Advisory Committee, organized a business conference showcasing sustainable heating options as alternatives to fracked gas. With yet more residents involved, including neighbors surrounding the proposed site, the movement in town to stand against dirty energy is growing.

Lebanon is one of many communities in New Hampshire and across our region facing new fossil fuel infrastructure proposals and fighting back. We’re ready for a future that is fossil fuel-free. With activists like these leading the way, we know we can get there.

Last night, more than 50 people, including a group of Lebanon High School students, rallied on the steps of Lebanon City Hall to send city government the message, “No Pipeline Here!” Most then walked inside to deliver over 1,100 signatures, all from Lebanon residents and students calling on the City Council to take every legal and regulatory action at its disposal to prevent a natural gas storage facility, regasification plant, and pipeline from proceeding. 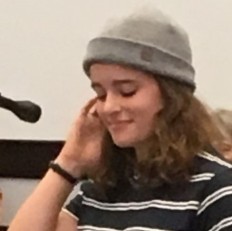 Lebanon High School junior Celia Barnett, who led the rally and later addressed the City Council, said, “Until I learned about the petition I was unaware of the gas pipeline that was planned for my community. I was shocked to find out about this dirty and dangerous pipeline. Installing this pipeline will make it much more difficult to move towards renewable energies in the future. I ended up immediately wanting to make a difference.”

As Celia concluded her remarks, a classmate presented a petition signed by 115 Lebanon High School students to the council.  Next, Chuck Manns, read out the petition, signed by 1059 Lebanon residents who called on the City Council to “take every legal and regulatory action at its disposal to deny the natural gas depot/pipeline”.  Mr. Manns, a resident of the Trues Brook neighborhood, which is closest to the proposed site of the storage tanks then addressed safety concerns related to trucking liquefied natural gas (LNG) to the proposed site on a congested main artery through West Lebanon.

Several other Lebanon residents and the chair of the Hartford, VT Selectboard made powerful statements to the City Council.  Dr. Eric Bronstein, a family physician and resident of Lebanon, addressed the public health impacts of gas extracted by fracking then noted that gas worsens climate change.  “A lot could go wrong with this pipeline, and likely would go wrong, based on this industry’s track record. But this issue is way bigger than our backyard,” said Dr. Bronstein. “We need to do better than just asking ourselves what could go wrong. We need to ask ourselves what can we do right for the safety of our neighborhoods, our families, our streets, our businesses, our state, and this planet we care about.”

Sarah Riley, a member of Sustainable Lebanon, the grassroots volunteer group that organized the petition drive and rally, pointed out “troubling indications” about the safety track record of Liberty Utilities, the company that proposes to build the gas project in Lebanon.  She drew attention to a report prepared for Liberty by consulting engineers in August 2015, and noted that specific safety concerns remain unstudied by the company more than three years later.  She also noted that Liberty had kept that “fatal flaw analysis” shielded from public view until spring of 2018 when the Public Utilities Commission finally required release of the document following a citizen request under New Hampshire’s right-to-know law.  Ms. Riley pointed out that the PUC’s Safety Division, in assessing Liberty a $20,000 fine in a gas project in Keene, cited the company’s “not appropriately following the most minimal of federal safety regulations, Liberty’s inability to properly follow its own written procedures and maintaining documentation of the steps being completed per the applicable procedures…”  Liberty was fined $54,000 in 2016 and 2017 for failing to monitor leaks in its existing pipelines.

Phil Bush, another member of Sustainable Lebanon, presented a request that the City Council set up a task force dedicated to finding ways that the city of Lebanon can prevent the pipeline from being built. According to Mr. Bush’s statement, the task force should include citizen participation from the start and consider opportunities for the City Council to prevent pipeline construction, such as developing an amendment to the City’s zoning ordinance, opposing the special exemption from the zoning board that the pipeline requires, and supporting local businesses in rejecting the pipeline proposal. Sustainable Lebanon suggests that the City also explore ways that it can partner with other municipalities, such as Keene and towns along the Granite Bridge route, to oppose the pipeline, and join cities across the state in passing legislation to stop construction of new fossil fuel infrastructure.

Last March, Liberty Utilities secured a gas distribution franchise from the PUC, which provides it a license to build an LNG storage depot and regasification facility and to construct a pipeline through Lebanon and Hanover streets, despite objection from thousands of residents and both municipalities.  Liberty would need local zoning permits before it can start construction.

Lebanon City Councilor Clifton Below told the PUC at a hearing In September, 2017 that the city does not support expanding natural gas. He testified “to make clear to the Commission that our current Master Plan, which is the official policy of the City adopted by both the Planning Board and the City Council, does not support the expanded use of natural gas. It’s not consistent with our goals to move more quickly to reduce our carbon footprint as a city and to develop renewable energy.”

Phil Bush said that catastrophic climate events have convinced Sustainable Lebanon that we have to move quickly to curtail the warming caused by burning fossil fuels. And many agree: a poll of NH residents in October 2016 showed that 67% favor renewable energy to 24% favoring natural gas.

“Many people think natural gas is green, but it’s not good for the environment,” according to Sustainable Lebanon’s Jon Chaffee. “It is a fossil fuel, and it causes even more global warming than the other fossil fuels now used for heating in Lebanon, because gas leaks up into the atmosphere where it has a greenhouse effect 80 times that of CO2”.

Chaffee, who recently organized a forum for Lebanon business leaders on renewable energy alternatives, also said, “The pipeline can be stopped if there are no customers. If local businesses are sensitive to public opinion and hear how strongly the public wants to see Lebanon move away from fossil fuels, we are hoping they will refuse to contract for pipeline gas.” Liberty is required by the PUC to obtain commitments from 50% of the customers needed to support the pipeline before it can start construction.

“We hope our City Council will respect public opinion and our Master Plan principles and take further action to stop this pipeline,” says Sarah Riley of Sustainable Lebanon. She adds, “To that end, I think the best first action the Council can take will be to set up the pipeline Task Force as we have urged them to do.”

Thanks to Stuart Blood of Energy and Climate – Upper Valley for this report.

Energy and Climate – Upper Valley is a group comprising community members and organizations, including representatives from the New Hampshire Sierra Club Upper Valley Group and the Academy for Systems Change.

For any questions feel free to email us at: ecuv@riseup.net

#Fracking4Plastics – a link that drives plastic and climate pollution

Shale gas and fracking is creating a plastics renaissance in the U.S.

It is increasingly clear that the plastics industry in the United States has reaped massive hidden benefits from the environmentally destructive fracking boom. Hydraulic fracturing (or fracking) injects large quantities of fresh water, sand and toxic chemicals under high pressure to release oil and gas that are tightly held in rock layers. Read More

Posted in Shale Gas to Plastic Connection | Leave a comment 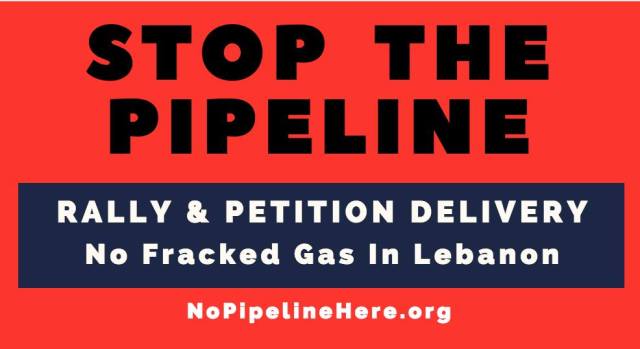 On October 17, at 6:30 pm, concerned residents will rally on the steps of Lebanon City Hall to send city government the message, “No Pipeline Here!” They will then go inside at 7:00 pm to deliver to the City Council a petition signed by over 1,100 Lebanon residents. The petition, circulated by Sustainable Lebanon, asks the City Council to take every legal and regulatory action at its disposal to prevent the natural gas storage facility and pipeline from proceeding.

Last March, Liberty Utilities secured a gas distribution franchise from the NH Public Utilities Commission (PUC), which provides it a license to build a fracked gas storage depot and construct a pipeline through Lebanon and Hanover streets, despite objection from thousands of residents and both municipalities. Catastrophic climate events along with concerns about health and safety have convinced Sustainable Lebanon that we have to move quickly to stop burning fossil fuels.

WHO: Lebanon residents who oppose the pipeline, including the grassroots volunteer group Sustainable Lebanon.

WHAT: A rally with concerned residents on the steps of City Hall, followed by a petition delivery to City Council with over 1,100 signatures.

WHY: The fracked gas pipeline proposed would threaten the health and safety of Lebanon residents and exacerbate climate change. Lebanon residents oppose the pipeline and are calling on City Council to take every legal and regulatory action to stop it.

Sustainable Lebanon, a grassroots volunteer group founded in 2017, inspires and supports sustainable practices in Lebanon – working with residents, businesses, nonprofits, and the municipality, in a way that is inclusive, coordinated, and focused on a positive long-term vision.