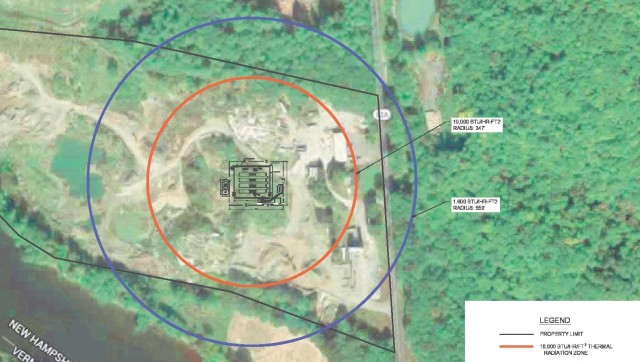 In a fatal flaw analysis memo prepared for Liberty in August 2015, engineers at the consulting firm Sanborn Head concluded from initial “conceptual level thermal radiation modeling” that an “exclusion zone” surrounding a potential fire at the facility would barely fit within the site’s boundaries, as required by federal safety codes. However, the report also cautioned that additional computer modeling required for the project could result in an exclusion zone that extends beyond the property’s boundaries, one of which is Route 12A.

The exclusion zone predicted by the thermal radiation model is shown on the map above by the red circle.  According to the legend, the blue circle represents “the nearest point located outside the owner’s property line that can be used for an outdoor assembly by groups of 50 or more persons”.

Significantly the Sanborn Head fatal flaw analysis notes that there had been no vapor dispersion modeling, which is necessary to determine the boundaries of the “50% LEL exclusion zone”.  LEL is the Lower Explosive Limit, which is the lowest concentration, by percentage, of a gas or vapor in air that is capable of producing a flash of fire in the presence of an ignition source.  The memo goes on to “strongly recommend” that vapor dispersion modeling be done as soon as possible, “since it is our experience that keeping the 50% LEL exclusion zone within the property boundaries is typically more challenging than keeping the 10,000 BTU/hr-ft2 exclusion zone [the red circle] within the property boundaries”.  The memo mentions some mitigation measures — insulated concrete, vapor fences, water spray systems — that could be considered if the 50% LEL goes beyond the property line.

Of course, we have no way of knowing if Liberty has followed their engineers’ recommendation and completed the vapor dispersion modeling.  We also don’t know if bedrock or wetlands will further constrain the siting of the facility, as the memo noted might be the case.

The Sanborn Head fatal flaw analysis was one set of information that Liberty Utilities had previously redacted to keep it hidden from public scrutiny.  Liberty claimed protection for the report and a great deal of additional material, citing an exemption under the New Hampshire right-to-know law for commercial information.  The Public Utilities Commission allowed the material to remain redacted for almost a year after citizen intervenors Ariel Arwen and Jon Chaffee objected to the abuse of that statute. Finally, in its March 5 order granting Liberty a gas distribution franchise for Lebanon and Hanover, the PUC ruled that the company had to release much of the redacted information, including the fatal flaw analysis.  If the two citizens representing themselves before the PUC without an attorney had not forced the issue, the information in the memo would never have seen the light of day.

And that’s why we stay vigilant.

This entry was posted in Uncategorized. Bookmark the permalink.